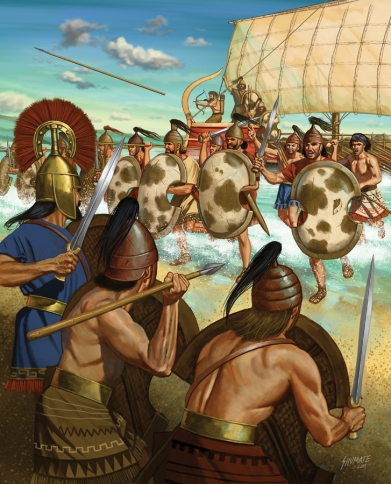 The monarchy period of Israel and Judah can be firmly dated as contemporary with the 18th and 19th dynasties of Egypt, which conventional historians have placed six centuries too early.  This historical revision was first suggested by Immanuel Velikovsky, and much ridiculed, but has since been confirmed beyond doubt by revisionist scholars such as Damien Mackey[10].

For more up-to-date sites now regarding this study, check out:

Description of our AMAIC sites

Ancient Babylon was known as the “glory of the kingdoms” (Isaiah 13:19), indeed “the praise of the whole earth” (Jeremiah 51:41). Babylon’s beauty, strength, and prominence was unparalleled in the ancient world. The citadel seemed impregnable. Jeremiah alluded to Babylon’s massive fortifications (51:53, 58). Herodotus says that the city was enclosed by great walls 350 feet high and 75 feet thick (i.178). Isaiah spoke of Babylon’s “doors of brass” (45:2). The Greek historian declared that one hundred gates of brass were in the wall (I.179).

What does this mean? Herodotus describes the city as straddling the Euphrates river. He records that Cyrus diverted the river, by means of a canal, into a nearby basin. Even then, says he, the Babylonians could have defended the city, except for the fact that in their confidence they “were engaged in a festival” characterized by dancing and revelry, and so were taken by surprise (i.191).

With great precision, Jeremiah prophesied this very circumstance. The inmates of the city would be feasting and drunken (51:39, 57), and thus captured unaware (50:24). It must be emphasized in this connection that Jeremiah gave these prophecies about fifty-six years before the fall of Babylon (cf. 51:59), and about 150 years before the Greek historian produced his work!

In a curious declaration, Isaiah prophetically addresses Babylon as follows: “Come now, and sit in the dust, O virgin daughter of Babylon, sit on the ground” (47:1). What is the significance of the appellation “virgin”? It apparently is a reference to the fact that the mighty city had never been ravished before. Significantly, Herodotus describes the assault of Cyrus as “the first taking of Babylon” (i.191). Incredible! The “father of history” is an eloquent witness to the accuracy of Bible prophecy.