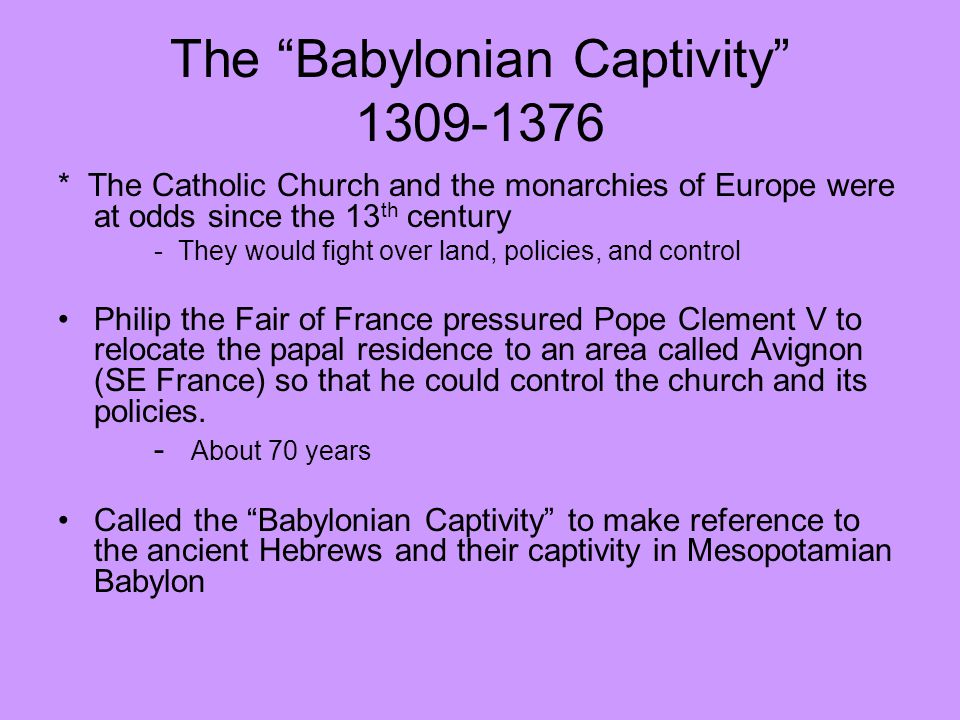 “Especially significant was Petrarch’s image of the Avignon papacy as the equal to the Babylonian Captivity, the idea that the popes lived in thrall just as the Israelites spent 70 years in captivity in Babylon, an image Martin Luther embraced with alacrity”.

For centuries, now, comparisons have been drawn between the biblical Babylonian Captivity of 70 years duration and the Avignon Captivity of the Church in France of approximately the same length of time.

At: https://www.gotquestions.org/Avignon-Papacy.html for instance, the question is asked

What was the Avignon Papacy / Babylonian Captivity of the Church?

with the following answer being given:

Answer: The Avignon Papacy was the time period in which the Roman Catholic pope resided in Avignon, France, instead of in Rome, from approximately 1309 to 1377. The Avignon Papacy is sometimes referred to as the Babylonian Captivity of the Church because it lasted nearly 70 years, which was the length of the Babylonian captivity of the Jews in the Bible (Jeremiah 29:10).

There was significant conflict between King Philip IV of France and Pope Boniface VIII. When the pope who succeeded Boniface VIII, Benedict XI, died after an exceedingly short reign, there was an extremely contentious papal conclave that eventually decided on Clement V, from France, as the next pope. Clement decided to remain in France and established a new papal residence in Avignon, France, in 1309. The next six popes who succeeded him, all French, kept the papal enclave in Avignon.

In 1376, Pope Gregory XI decided to move the papacy back to Rome due to the steadily increasing amount of power the French monarchy had developed over the papacy in its time in Avignon. However, when Gregory XI died, his successor, Urban VI, was rejected by much of Christendom. This resulted in a new line of popes in Avignon in opposition to the popes in Rome. In what became known as the Western Schism, some clergy supported the Avignon popes, and others supported the Roman popes.
The Western Schism gave rise to the conciliar movement (conciliarism), in which ecumenical church councils claimed authority over the papacy. At the Council of Pisa in 1410, a new pope, Alexander V, was elected and ruled for ten months before being replaced by John XXIII. So, for a time, there were three claimants to the papacy: one in Rome, one in Avignon, and one in Pisa. At the Council of Constance in 1417, John XXIII was deposed, Gregory XII of Rome was forced to resign, the Avignon popes were declared to be “antipopes,” and Pope Martin V was elected as the new pope in Rome. These decisions were accepted by the vast majority of Christendom, and so the Western Schism was ended, although there were various men claiming to be the pope in France until 1437. ….

And again at: https://www.catholicculture.org/culture/library/view.cfm?recnum=8903 we read:

The great Italian humanist and poet Petrarch wrote of the popes during the so-called Avignon Papacy:

Now I am living in France, in the Babylon of the West . . . Here reign the successors of the poor fishermen of Galilee; they have strangely forgotten their origin. I am astounded, as I recall their predecessors, to see these men loaded with gold and clad in purple, boasting of the spoils of princes and nations; to see luxurious palaces and heights crowned with fortifications, instead of a boat turned downward for shelter.

These pontiffs — all of them French — resided at Avignon, France, instead of Rome, from 1309 to 1377. The letters of Petrarch were a reflection of his own dislike for Avignon and his desire to see the popes return to the Eternal City. But Petrarch’s harsh caricature of the popes also has served as ammunition for writers, critics, and heretics ever since. Especially significant was Petrarch’s image of the Avignon papacy as the equal to the Babylonian Captivity, the idea that the popes lived in thrall just as the Israelites spent 70 years in captivity in Babylon, an image Martin Luther embraced with alacrity. ….

I now find it rather intriguing that I had proposed in my article:

Not the Templars, but the enemies of the Jews, arrested on the 13th day of the month

that the famous incident when King Philip IV is said to have arrested the Templar knights, on the 13th day of a month (October), may actually have had its origins in the story of Queen Esther, King Ahasuerus – with whom I had then likened King Philip IV of France – and the evil Haman. More recently, I have historically identified Haman as the Jewish king, Amon (= Jehoiachin/ Coniah). See my article:

The drama narrated in the Book of Esther – and perhaps picked up in a garbled fashion in the later accounts of King Philip IV and the Knights Templar – would be cosmically ‘re-enacted’ in the great drama at Fatima, Portugal, in 1917, again on the 13th day (13th May to 13th October), culminating in the promised great miracle. See my book:

The Five First Saturdays of Our Lady of Fatima

The stupendous Miracle of the Sun, 1917, on October 13th (same day Templars were supposedly arrested, 13 October 1307) presages the ultimate Triumph of the Immaculate Heart of Mary of whom Queen Esther was a type.